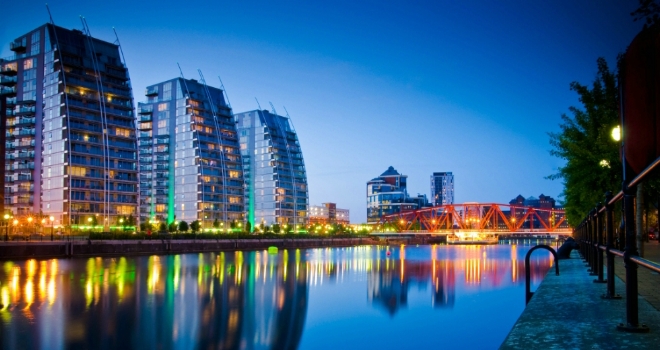 Hometrack reported that UK City house price inflation has increased to 6.1%, the highest rate of growth since September 2016 and above the UK average growth rate (4.7%).

The latest data and analysis from Hometrack has revealed a spate of robust growth in regional cities where affordability levels, measured on a price to earnings basis, are in line with the 15-year average. A ccording to the report, in London affordability is at an all-time high of 14.5x earnings.

Manchester (7.9%) and Birmingham (7.3%) are registering the fastest rate of growth. House prices in Aberdeen continue to fall (-3.1%) while the rate of growth across London continues to stabilise (3.0%) supported by tightening supply and lower turnover.

This month we have updated our annual analysis of housing affordability. This reveals the house price to earnings ratio in London has reached an all-time high of 14.5x (fig. 2). Oxford, Cambridge and Bournemouth also have double digit price to earnings ratios. Strong house price inflation in Bristol has pushed the ratio to 9.7x.  These cities have affordability ratios that are 20% to 40% higher than the 15-year average.

Most cities have p/e ratios in line with long run

Most cities outside the south east of England have price to earnings ratios that are broadly in line with the long run, 15-year, average. Mortgage rates have fallen over this time, boosting the buying power of households. The strength of underlying economies influences the speed at which this buying power feeds into house prices. Our city indices have tracked this variation in growth with prices 60% higher than 2007 levels in London and Cambridge while prices in Glasgow and Liverpool are lower.

Despite the recent increase in interest rates, we continue to believe that house prices in regional cities have further upside given the current position of housing affordability and the similarity of the current housing cycle to the last cycle. However, establishing a sustainable price to earnings benchmark at city level that is consistent with lower mortgage rates is complex. The London price to earnings ratio is 40% over its 15-year average, while it is 29% in Bristol.

Were cities such as Leeds, Manchester and Birmingham to see the price to earnings ratio reach 30% over the 15-year average, this would equate to a house price increase of 20% to 25%. We believe this is very feasible so long as mortgage rates remain low and the economy continues to grow. These increases are equivalent to 3 years of growth at current levels. Projections from the Office for Budget Responsibility for weaker growth in the economy and earnings mean the timing of these increases will simply be drawn out over a longer period.

Where next for the p/e ratio in London?

Conversely, house prices in London would need to fall by 6% in nominal terms to take the ratio to 30% over the 15-year average. For the ratio to reduce to 20% would require a 13% fall in prices.

While the London City index is registering price increases of 3%, this is being driven by outlying commuter areas. In central London prices are flat to falling in low single digits. The gap between asking and achieved prices is greatest in inner London at 8-10%.

House prices are in the process of adjusting to what buyers are willing or able to pay. Tax changes for investors and low yields have already reduced investor demand in London. Mortgaged first-time buyer numbers are also down 15% over the last 3 years. We expect Budget stamp duty changes to have limited impact in London as the greatest barrier remains the high level of income required to pass mortgage affordability stress tests.

Greater realism amongst buyers and sellers will translate into sales prices being agreed at lower levels than might have been achieved in the recent past when market conditions were stronger. This will translate into single digit price inflation or small nominal price falls as prices re-adjust with the p/e ratio expected to drift lower as a result.  One positive for London is that the strength of house price growth over recent years means there is a significant amount of equity in the London housing market that can absorb the impact of price falls.

The recent abolition of first-time buyer stamp duty may assist this level of growth as a rejuvenated level of buyer demand further outstripping the supply of housing will see prices continue to climb in the long-term.

For many trying to get a foot on the ladder, the stamp duty changes will be of little comfort given the continued increase in prices, as the obstacle of affordability and the gulf between this and the earnings on offer is already rather sizable and preventing them from taking that first step.

London continues to be a shining beacon of unaffordability where the earnings to property price ratio is concerned, and it is unlikely that any reprieve of first-time buyer stamp duty will do anything to change that."

Ged McPartlin, director at Ascend Properties comments: “Manchester has continued to remain the fastest growing city fairly continuously throughout this year, and as we head into 2018, the city shows no signs of slowing down. What the report shows is certainly being reflected in what we’re seeing in the property market – demand for cities like Manchester have never been so high. Within certain pockets of the city centre such as Northern Quarter and Ancoats, price growth can even outperform the projected 7.9% growth for Manchester we can see in the report. With reformed stamp duty rules recently brought in for first time buyers, it’s likely we’ll see a bigger boost to property sales in the north over the next 12 months."

Graham Davidson, managing director at Sequre Property Investment, comments: “These reports have been consistent in showing us the strength of the property market, particularly in the North, and this report is no different. Manchester once again rises to the top with an annual growth of 7.9% while London falls behind with low growth levels of just 3% and a staggering house price to earnings ratio of 14.5x.

Following on from last week’s Budget announcement, this pattern is likely to continue, as the stamp duty reform for first time buyers could result in a further price increase for property as demand continues, which will naturally result in capital growth for investors. Also announced by the Chancellor, further investment into property and business within key northern cities will continue to breed success and allow the property market in areas such as Manchester, Liverpool and Sheffield to thrive even further.”