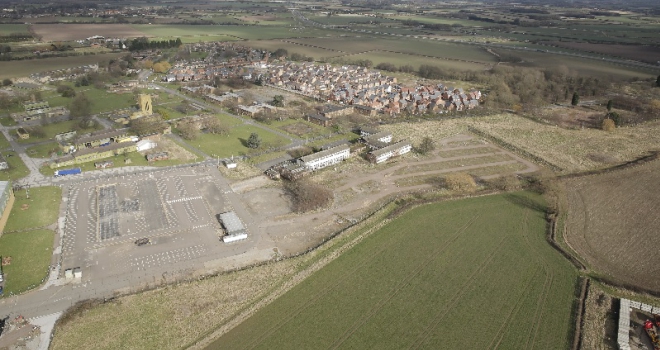 Nottinghamshire is set to have its very first 'garden village' developed on a 250-acre former RAF base in the county.

Images of the site of which part will soon be transformed have been revealed by Innes England – the commercial property agent that agreed the deal with housebuilder Redrow Homes.

The 250-acre site, which is located near Bingham, has already seen significant development, with Bellway and David Wilson Homes delivering the first phase of the scheme. This second phase – to be known as ‘Newton Garden Village – will see Redrow Homes build 528 new homes.

Innes England, which has offices in Nottingham, Derby and Leicester, has worked with the landowner for a number of years and director Craig Straw says he is delighted to see this important second phase of the development taking shape.

Craig said: “We have a longstanding relationship with the landowner and have really offered a ‘cradle to grave’ service on this site. We have worked with them for a number of years to ensure the viability of this site for development and are very pleased to see this second phase of housing moving forwards.

“This is a really interesting site, which included a number of vacant aircraft hangars from its time as an MOD base when the site was originally acquired. Part of our role was letting those to a range of regional, national and international operators, which in turn generated an income stream to support the promotion of the site.

“We also played an integral role in the master planning team which secured consent for the initial first phase of development and then, in 2018, this second element which will now be taken forwards by Redrow Homes. We also worked closely with Rushcliffe Borough Council to secure £2.9m of infrastructure funding from Highways England to support the development.

“This is a hugely important strategic development site and we are very pleased indeed to have agreed on a deal with Redrow Homes East Midlands to deliver the second phase. Redrow’s plans will see a really fantastic scheme delivered here and we are excited to see things start to happen on-site over the coming months.”

Newton Garden Village will comprise 528 new homes, of between two and five bedrooms, alongside open space, traditional village greens and allotments, offering wildlife-rich spaces that are easily accessible to the local community.

Redrow Homes will also be supporting the creation of a new primary school, community hall and local centre along with sports pitches for community access.

Martyn Pask, managing director for Redrow East Midlands, added: “We are delighted to have secured consent to launch our second development in Nottinghamshire and our very first garden village in the East Midlands.

“With vast amounts of green, open space, the development will offer excellent transport links across the country, while also offering a wonderful community right on its doorstep.

“Here at Redrow, we strive to create thriving communities at each of our developments, through building high-quality homes and local amenities. We anticipate that this will be extremely popular and we invite potential buyers to register their interest now to be one of the first to know when plots at this wonderful development are released.”