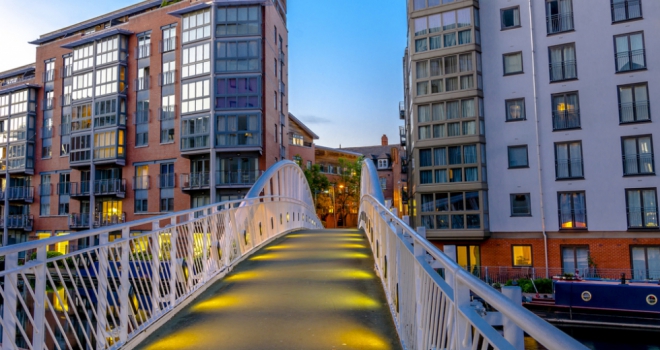 The height of the pandemic and subsequent lockdowns saw thousands of tenants heading out of the cities to be closer to family and friends, resulting in demand for urban tenancies and rents falling off a cliff-edge.

However, as the country adjusts, offices reopen and society returns to some semblance of normality, tenants are beginning to boomerang back to city life resulting in double-digit growth in rents in some areas and competition heating up for flats across Great Britain’s biggest city centres.

The latest market analysis from Rightmove reveals that some city centres have not only bounced back from the declines recorded during the year since the pandemic started, they are also now outpacing the national average.

Across Britain, rents are rising at the fastest rate ever recorded by Rightmove, now up 8.6% annually outside London, and the capital is finally showing signs of growth, with rents up by 2.7% on a year ago.

The boomerang effect on city centres

In Birmingham city centre rents fell by 5% between February 2020 and February 2021, but by September this year, the increased demand helped them to grow to 10% higher than pre-pandemic levels.

It is a similar picture in Nottingham city centre where rents fell 2%, and have now grown to 11% higher than before the pandemic.

Edinburgh city centre has seen rents grow by £100 since February of this year, but they still trail by 5% when compared with February 2020.

Fastest pace ever recorded for rents outside London

Total rental demand is now up by 39% compared with the same time in 2019, and up by 11% compared with a strong September last year. This demand has led to properties being snapped up at the quickest rate ever recorded, at 17 days.

The speed and strength of demand in the market have pushed rents up to 8.6% outside London, and they are up over 10% in the North West, North East, the East Midlands and Wales.

The proportion of available properties that are in the suburbs has dropped from 46% to 33%, while rural areas have declined from 6% to 3%.

Flats back in fashion, with room for an office?

Competition within the flats market overall is up 95% on average than in September 2020, compared with a 37% increase for houses.

Rightmove’s Director of Property Data Tim Bannister, said: “A year of various lockdowns saw many city centres hit with either a complete standstill in rental growth or falls of over ten per cent in some cases, as tenants moved further out or back in with family temporarily. But as society opened up again cities have not only bounced back but are now seeing strong rental growth, fuelled by increased tenant demand and limited available stock. It’s still easier to secure a place in a city centre than in some of the hottest suburban and rural rental markets right now, but as more tenants boomerang back to busier locations this is likely to change.

“The shortage of rental properties in the market has led to Rightmove recording the fastest ever pace of rent rises in a year than ever before, and there are finally green shoots of growth in London’s rental market, with the first annual rise since before the pandemic started. Demand is notably up in London compared with this time last year, another sign that people are reconsidering where they want to live.”