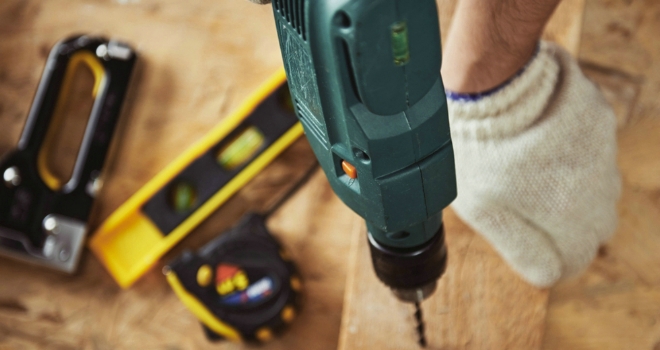 British attitudes towards DIY and home improvements are enthusiastic if anything and with current conditions in the UK property market overheating and highly competitive, many would-be home movers have decided, for now, to stay put and improve rather than move.

Despite our love of all things DIY, it doesn't mean that we're any good at anything beyond the basics. New research has revealed the DIY tasks we hate doing the most and highlights that less than one in eight are able to do any advanced work around their home.

Online designer radiator specialist, BestHeating, asked homeowners about their home update skills, polling them on their most disliked DIY tasks, their favourites and when they call the experts in.

Of the 2,003 Brits polled, 61% admitted they could only complete the most basic tasks when making alterations to their home. This has led to more than a quarter saying they are disappointed or embarrassed (27%) by their skills.

Despite this, less than half have used a tradesperson for tasks around their home in the past year (49%) which shows the nation is planning on improving their ability when it comes to home improvement, and over half say that they wish they knew more when it comes to DIY (53%).

The DIY tasks Brits hate doing the most

The least liked DIY task is repairing and installing a new radiator which 84% hate doing themselves.

John Lawless from BestHeating, comments: “Choose a replacement that has identical pipe centres to avoid having to make alterations to your pipework. Modern plumbing fittings are very easy to work with, so by doing this you’ll give yourself a wider range of radiators to choose from. Just be sure to drain the system properly before you begin and remove the flooring and any skirting boards that are in your way to gain proper access to the pipework.”

The second most hated DIY task is installing new units including wardrobes and kitchen units with three quarters not able to do this. The same amount dislikes putting down flooring themselves - whether that’s carpet, laminate or even tiles - Brits find this too complicated to do.

Saving money by utilising old items around the home may have been popular in the last year but 71% still don’t upcycle or repair things, making this the fourth most hated task.

This is followed by installing new appliances (65%) such as dishwashers, tumble dryers and washing machines with reasons for this including struggling to connect the pipes associated with these. Three fifths can’t fix a tap which further shows our pipe strains.

John says: “It’s shocking to see that despite a lot more people taking up DIY in the last 15 months that so few of us can do anything more than paint a wall or hang pictures, and there appears to be a theme in disliking tasks that require a little more effort from us.

“We should be encouraged by a large proportion of the nation wanting to improve when it comes to doing DIY, so hopefully we’ll soon see more people tackling advanced tasks like installing a new radiator they have bought.

“Being able to do DIY at home yourself has so many benefits including saving money on paying someone to come out and check, fix or install the simplest of tasks or appliances that you could do yourself. It also provides a great sense of achievement that allows you to brag to others about the talent you have acquired.”