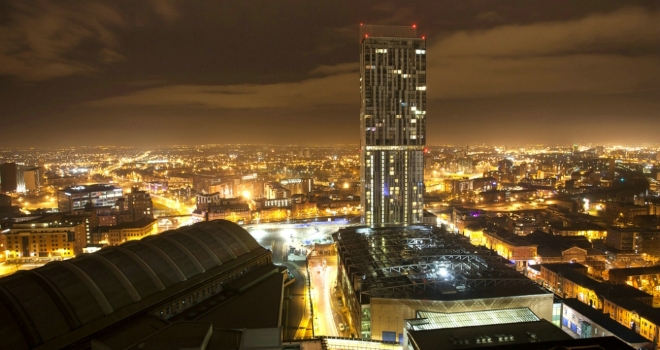 The latest Hometrack house price index has revealed that, as prices in the capital slip, Manchester and Birmingham are the two cities that have seen the biggest growth in house prices in the 12 months to August.

According to the analysis, Manchester has seen prices rise by 7.3%, closely followed by Birmingham at 6.7%. Edinburgh has also seen a marked improvement of 6.6% in the past year.

Other cities that have recently enjoyed strong growth such as Cambridge (2.8%) and Oxford (3.8%) have also registered a steep slowdown in the rate of price inflation over the last 12 months as affordability pressures constrain housing demand. Even so, Aberdeen remains the only city in the top 20 to register negative growth down -1.9% year on year.

New analysis accompanying this month’s index reveals that the total value of private housing in the UK’s top 20 cities has passed the £3 trillion mark for the first time. A staggering 66% of that figure or £2.0 trillion is accounted for by the value of London which covers London and its commuter hinterland. Birmingham and Manchester the second and third most valuable cities accounting for £152bn (5%) and £132bn (4%) respectively.

In the past twelve months the overall value of housing in UK cities has grown £89bn.

Richard Donnell, Research and Insight Director at Hometrack, said: “House prices continue to rise on the back of sustained price inflation in large regional cities as unemployment falls and mortgage rates remain low. Weak growth in London is acting as a drag on the headline rate of growth. We expect this pattern to remain a feature of the market for the rest of the year and into 2018.

The accumulation of housing equity from rising house prices means there is a major opportunity from innovation in financial and housing products to help households leverage or access housing equity. This is a complex and evolving market with consumer demands being shaped by demographic and economic change.

The markets for down-sizing and equity release are relatively small but further pressure for innovation are inevitable as households seek additional ways to assist younger generations into housing and onto the housing ladder while also facing up to the challenges of how to fund the cost of living into later life. While there is a significant amount of housing equity in aggregate, a varied distribution in the scale of housing equity available to different households means different solutions will be required to meet consumer demand as this market segment evolves.”

Ged McPartlin, director at Ascend Properties, comments: “The north is booming as expected, and from an agents point of view, these figures truly reflect what we’re seeing in the market today – Manchester named as the best city for growth and experiencing a strong increase of 7.3% as demand surges for property across the city. While buyer demand will always be high in the city centre, the new university year also results in a rush of tenants who are desperate to secure a decent property before the term starts, so more opportunities are cropping up for landlords. It’s a busy time of year for the market and the price rise clearly reflects this.”

Graham Davidson, managing director of buy to let specialist, Sequre Property Investment, comments: “Manchester is reported as the fastest growing city in the UK once again, at an amazing 7.3% growth.

With the sheer volume of public and private investment being ploughed into the city bolstering employment and local economies, this has played a huge part in the demand for property in the area. The headline figures of this report clearly indicates that any buy to let investors looking to make decent returns from their assets need to head north.

In a stark comparison, London appears to be continuing on its downward spiral with a fairly inadequate growth of 1.9%, something we’ve predicted for quite some time now. It’s clear that those who have chased capital growth for many years are now steering clear and looking up north where property is much more affordable, rental yields are significantly higher and capital growth is following a firm upward curve.”