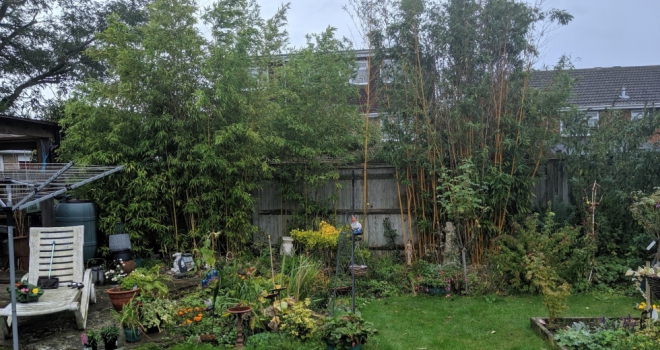 Environet UK, a Japanese Knotweed specialist, has issued warnings to homeowners over concerns that invasive bamboo is going unchecked and taking over gardens across Britain.

British homeowners may not realise that most species are invasive if left unchecked, with the ‘running’ varieties extending for up to 30ft beneath the ground, warns the firm.

Easy to grow, hardy and tolerating most soil types, bamboo has grown in popularity among UK gardeners in recent years, particularly favoured in urban areas for its screening qualities, creating privacy in overlooked gardens.

However, bamboo can also be highly invasive and can spread out of control if allowed. There are several varieties which can be categorised into the ‘clumping’ and ‘running’ types, all of which have large underground root and rhizome systems. But it’s the running types in particular that cause headaches for homeowners, sending out long lateral rhizomes up to 30ft from the main plant, causing the plant to spread with new shoots unexpectedly appearing in new locations. When it encroaches into an adjoining property it can cause disputes between neighbours.

Due to the extraordinary distance the roots can travel, running bamboo has the potential to be more damaging to property than Japanese knotweed and has similar abilities to push through brickwork, drains, cavity walls, patios and exploit cracks or weaknesses in concrete. In a recent case, a homeowner in Chandlers Ford, Hampshire, had bamboo growing up between the skirting board and the wall in his living room, having encroached from next door’s garden and exploited a weakness in the property’s foundations.

Even clumping bamboos, although preferable to running varieties, can become invasive if left unchecked for a number of years. All bamboo should be planted in containers with root barriers designed to contain bamboo, to ensure they cannot spread.

Nic Seal, MD of Environet UK, which deals with all types of invasive plants including Japanese knotweed and bamboo, said: "Bamboo is a vigorous and fast-growing plant that has been steadily growing in popularity in the UK over the last decade or so, but it’s very difficult to contain and virtually impossible to kill with herbicide. It’s commonly sold at nurseries and garden centres across the country with little or no warnings about its invasive nature or sensible advice about how to contain it.

If you do decide to plant bamboo, make sure you choose a clumping variety such as Bambusa or Chusquea and avoid the running types which send long roots out spreading many metres from the original plant. It’s also a good idea to place it in a pot or bed which is lined with a strong vertical root barrier designed to contain bamboo."

Attempts to kill the plant using herbicide are likely to fail, leaving only two practical approaches for those wanting their gardens bamboo free. It is possible to treat it yourself using the energy depletion method, which involves cutting the canes to ground level before new leaf appears and repeating the process annually in order to deplete the energy reserves in the root system, which can take several years. Alternatively, it can be professionally excavated in a matter of days.

Mark Montaldo, Solicitor and Director at CEL Solicitors which deals with legal claims relating to invasive plants, said: “Bamboo is a growing problem, as unlike Japanese knotweed it’s not officially classed as an invasive species and there are currently no restrictions on planting it. Consequently, there has been an increase in the number of neighbourly disputes following encroachment of bamboo across garden borders.

I have acted for a number of clients who have taken legal action against their neighbour for nuisance caused as a result of a bamboo infestation where the offending party has had to pay significant removal costs and legal bills. Due to the increase in nuisance claims it is something that the mortgage companies are closely looking at and I wouldn’t be surprised to see them imposing lending restrictions on properties that suffer with bamboo infestations in the future.”