Could you identify Japanese knotweed? 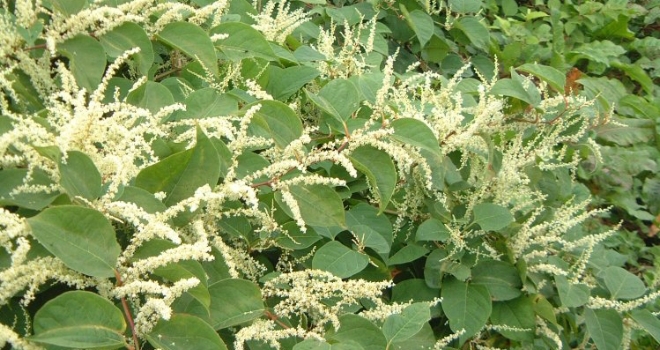 " The fact that only 19% of people in the UK can identify it from other common plants such as Bindweed and Ivy, is very concerning."

New research released today reveals that fewer than one fifth (19%) of Brits who say they are aware of Japanese knotweed can correctly identify the weed, described by the Environment Agency as “indisputably the UK’s most aggressive, destructive and invasive plant”.

When asked to pick out Japanese knotweed from a selection of five photographs, an overwhelming 81% were unable to correctly identify it, with 14% mistaking it for Bindweed, 8% selecting Houttuynia, 5% Russian Vine and 6% confusing knotweed with common Ivy, found in most British gardens.

The survey, commissioned by Japanese knotweed removal firm Environet and undertaken by YouGov, highlights a widespread lack of knowledge about Japanese knotweed which is leaving homeowners at risk. Failure to identify and treat Japanese knotweed as soon as it appears will result in it quickly spreading and becoming established. It can damage buildings and render them unsellable until a treatment plan is implemented, with an insurance-backed guarantee to satisfy mortgage lenders. It could also leave homeowners at risk of litigation from neighbours, if they allow the knotweed to spread.

While DIY attempts at treating Japanese knotweed can hasten its spread and make it more difficult to eradicate in the long term, at least 37% of respondents would attempt to tackle the knotweed themselves. The most popular method would be attempting to dig the knotweed out of the ground including the roots (27%), although because the plant can regrow from a piece of rhizome as small as a fingernail, this is highly unlikely to be successful. Other methods people would attempt include burning (4%), using household chemicals or diesel (4%) or covering it to deny sunlight (2%).

When it comes to selling a property affected by Japanese knotweed, three quarters (75%) of respondents would do the right thing and have the knotweed professionally treated prior to the sale.

However, worryingly, 4% admit they would attempt to cover it up or otherwise conceal it, hoping it is not discovered by a potential buyer. They would potentially face legal action though, due to the requirement to disclose its presence on the Law Society’s TA6 form. Based on the fact that an estimated 2% of properties in the UK are directly affected by knotweed, this could result in approximately 1,000 cases each year of knotweed concealment during property transactions.

Despite the fact that people struggle to recognise the plant by sight, general awareness of knotweed is high, with 76% of Brits having heard of the plant, compared to 75% last year. Awareness is highest amongst the over 55 age group (91%) and, geographically, in areas where the spread of the weed has been most prolific according to Environet’s heat maps, such as Wales (86%) and the South of England (81%), with Londoners the least aware (66%).

Only just over a third of those aware of the weed (36%), however, know that they could be sued if they allow Japanese knotweed to encroach from their property onto a neighbouring property and just 18% know they could face prosecution under ASBO legislation if this happened.

Nic Seal, founder and MD of Environet, said: “Most people have heard of Japanese knotweed but the fact that only 19% of people in the UK can identify it from other common plants such as Bindweed and Ivy, is very concerning.

“If left untreated Japanese knotweed will grow rapidly, by up to 10cm a day during the summer months, pushing up through cracks in concrete, cavity walls and drains and causing damage to property. The longer it is left, the further its underground root system will spread and the more costly it will be to tackle. But it’s not just about protecting one’s property from damage and decreased value, it is also about protecting oneself from the risk of being sued if the knotweed is allowed to spread.

“The good news is that Japanese knotweed can be treated, either over two to three years using herbicide methods, or immediately by excavating it from the ground. With an insurance-backed guarantee secured for the work, most high street mortgage lenders will be happy to lend against an affected property, meaning it can still be bought and sold.”

Chartered Surveyor Philip Santo FRICS added: “Professional treatment is the most effective way to manage and control Japanese knotweed and the key to selling is an approved Japanese Knotweed Management Plan from a reputable specialist. DIY treatments can make matters worse and the financial consequences of concealing or not declaring the presence of Japanese knotweed during a sale can easily run into tens of thousands of pounds, so it is just not worth taking the risk.”