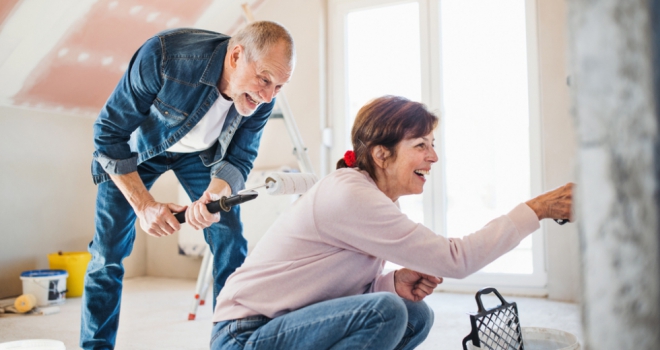 Newly released analysis into the home renovation habits among Brits has found that, when it comes to improving our property, those aged between 40-54 (gen x) are leading the way.

According to the findings of the latest annual Houzz & Home UK survey, Gen Xers accounted for two in five renovating homeowners in 2019 (42%).

Baby Boomers (ages 55-74) and Millennials (ages 25-39) follow in renovation activity with 37% and 19% of home renovators, respectively. More than half of homeowners reported a renovating project in 2019 (51%), tackling nearly three interior rooms on average.

When the study was fielded in early 2020, planned activity for the year remained consistent with the previous year, however, the impact of the coronavirus pandemic on planned renovation activity remains to be seen.

“That said, Gen Xers are continuing to drive renovation activity and spend, bringing consistency to the market as they pursue projects that they’ve been planning for years.”

Gen Xers were more likely to pursue a project because they’ve wanted to do it all along and finally have the financial means than because they wanted to customise a recently purchased home (41% versus 26%, respectively). Home purchases more commonly motivated Millennials (50%).

The Houzz & Home survey was fielded prior to the declaration of the coronavirus pandemic, between February-March 2020. At that time almost half of homeowners on Houzz reportedly planned to continue or start renovations this year (46%) and more than half of homeowners planned to make repairs (54%).

Preparing for a renovation in 2019 took homeowners as long as it did to actually renovate on average. Construction took between 1.9 and 13.4 months on average for different types of project and the planning phase took just as long. Kitchens require lengthy planning, averaging 10 months, compared with bathrooms (7.4 months). Surprisingly, entrance, hall or boot rooms, which typically command smaller square footage, took 7 months on average to plan.

Homeowners Look to Professionals for Help

Nine in ten homeowners hired a home professional for renovation projects in 2019 (91%). Baby Boomers were the most likely to hire a pro for their project (93%), followed by Gen Xers and Millennials (92 and 90%, respectively). Electricians and plumbers were the most common renovation professionals hired by renovating homeowners (58 and 51%, respectively).

Cash from savings was by far the most common form of home renovation payment (85%). The next most common source of funding was credit cards (20%), which was more commonly used by Millennials than the older generations.

Home Offices Get to Work

While bedrooms, bathrooms and kitchens continue to be the most popular rooms to renovate (29, 29 and 27%, respectively), home offices were added or upgraded by nearly one in ten homeowners in 2019 (9%). Millennials were more likely to pursue a home office project (11%) than Gen Xers or Baby Boomers (9 and 8%, respectively).

Sargsyan adds: “Subsequent surveys have shown that two in five homeowners who were in the midst of a project at the start of the pandemic were able to continue with renovations. That said, some homeowners have opted to delay certain elective renovations due to implications related to social contact, labour and material availability and personal discretionary spending.

"Deferred maintenance will accrue during this period, setting the stage for a renewed burst of activity following the pandemic."