Top tips to protect your shed 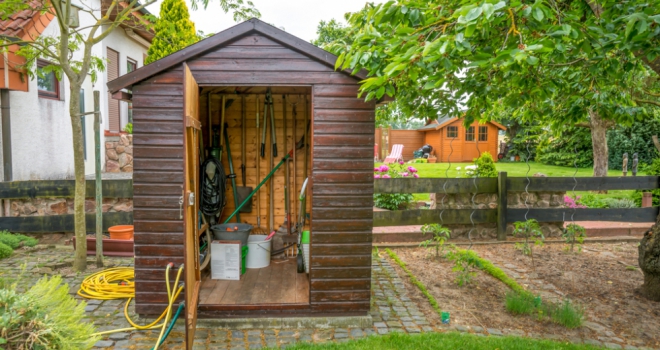 Newly released figures have shown that during the last three years, £30m worth of items have been stolen from garden sheds and outbuildings across England and Wales.

According to newly released figures from Churchill Home Insurance, since the beginning of 2018, more than 70,000 cases of theft from outbuildings have been reported to police forces, the equivalent of 64 a day.

Last year alone, around 20% of all burglary claims were for theft of contents from outbuildings - equating to £26,500 worth of claims for thefts from sheds, garages and outbuildings made every day throughout 2020.

The average value of items stored in an outbuilding is £1,414, although 8% store goods worth more than £5,000. However, 67% of people admit these buildings are easily accessible from outside their property and 16% do not do anything to secure them. Even those who don’t lock up their outbuildings store an average of £991 worth of items in them, meaning that a potential £5.8 billion is being left unsecured outside the home.

The most broken into outbuildings are garages (50%), followed by sheds (37%) and bike sheds (8%). Properties with easy access to gardens such as semi-detached (31%), detached (22%) and end-of-terrace (16%) account for the majority of outbuilding thefts.

Pedal bikes were the most commonly cited item stolen from outbuildings and accounted for 52% of all items reported stolen to police forces. Tools and hardware accounted for 22% of thefts, followed by gardening equipment and plants (8%), electronics and appliances (7%) and raw materials (7%).

According to claims data, homeowners in the South East are most likely to need to make a home insurance claim relating to an outbuilding theft, accounting for 15% of such claims in 2020. This was followed by London (14%), Yorkshire and the Humber (13%) and the South West (11%), with the North West (10%) completing the top five.

Interestingly, the South East and London, despite accounting for over a quarter of all claims for garden shed theft, have two of the lowest proportions of inhabitants with access to a garden shed or outhouse, with only 65% of people in the South East owning an outbuilding and 62% of Londoners. Conversely, while 90% of the Welsh population have an outbuilding, it experienced only three per cent of all outbuilding thefts last year.

Top tips to protect your outbuilding

1: Make sure your outbuilding is locked at all times, even while you are at home

3: If you have a window, remove high-value items from view or blackout the window

4: Chain and padlock expensive items such as bikes to the ground or wall

6: Deter burglars by planting holly bushes, hawthorn or other prickly plants around the boundaries of your garden- this can be off-putting for thieves who want to get in and out as quickly as possible

7: Putting gravel or stones on your garden paths or by your shed will make it harder for burglars to be quiet

Pritpal Powar, Head of Churchill Home Insurance, said: “This research shows just how easy it can be for burglars to steal goods from outbuildings. Many of us don’t give the same attention to the security of outbuildings as we do our main home, yet often store valuable goods there. These are great storage facilities, but we need to make sure they are not an easy target for burglars.

“Taking some simple steps will help deter burglars and these don’t need to be expensive security systems. Installing locks, removing valuables from sight and making sure the outbuilding is easily viewed or well-lit from your main residence will all contribute to making your home less of a target.”